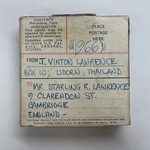 Lawrence, in a message to his brother Starling, intimates that the CIA may compel him to take a new position in Southern Laos. He is clearly not pleased. He discusses details about packing, leaving, hoping to meet up with Star in Switzerland, how much film he has shot over the last several weeks, and various interests he has developed in Laos, including astronomy and geology. He concludes by discussing how difficult it will be to leave.