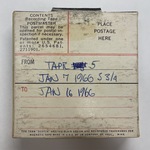 Side One Summary: Lawrence explains that his family is getting five tapes at once, in large part because of a crisis that developed while he was on R&R. His close friend, a Thai soldier named Dachar, had gone missing. He describes the seasonal nature of the war, with the Communists advancing in the dry season and the Lao forces pushing back during the rainy season, and then relates a story of going in search for Dachar and the circumstances in which he was eventually found.

Side Two Summary: As with his brother, Lawrence shares with his family that “[m]y future has been turned upside down again.” He has been recommended for a position in the south without anyone first asking him if he is interested. He discusses his options and how he hopes to spend his time at home. He then discusses revisiting numerous places for the last time, shooting lots of movies, and describes them to his family. He mentions giving his movies to a friend “who was going back to Washington to help put together a film on what we’ve done out here.” After discussing his packing and travel plans, he describes the Royal Family’s visit as successful. He describes meeting Prime Minister Souvanna Phouma and his son, “who is going to Harvard Business School next year.” He then describes the King and Queen (“quite a grand couple”) and compares the King quite favorably to Cambodia’s Prince Sihanouk. After describing some of the people and festivities associated with the visit, Lawrence mentions that he is in Udorn, where he has come to consult with Pat Landry to discuss his new job prospect. After mentioning some family correspondence, Lawrence reflects on the kind of job skills he has developed in Laos and observes that “I think the only thing I’d probably get a job with [back in the US] is with Cosa Nostra or the Mafia. I can’t see very much else that I’d be qualified for.”