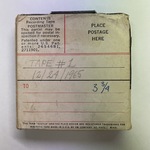 Lawrence reminisces on where he has spent his Christmases over the last four years and talks about a couple of gifts he received from the Lao Prime Minister and a Lao general. He then shares a few details of his recent R&R in Hong Kong and Macau, including opinions shared with him about the Chinese. He then discusses the prospects of a relative named John being sent to Vietnam and other family details.

He then discusses the details of and his feelings about his impending departure from Laos. He anticipates the annual celebration of the Hmong (“Meo”) New Year and reflects on this being his final Christmas in Laos.