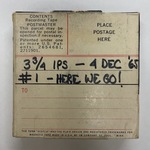 This is Lawrence’s first attempt to use his new recorder to send a message home to his family. He announces he will be coming home at the end of February 1966 and tries to explain the reasons for his departure. He discusses his plans to travel westward before arriving home and hopes to meet up with family friends and perhaps his brothers for skiing in Switzerland. He then further surmises on what the CIA has planned for him once he returns stateside and considers his educational options. He explains that he is staying in Laos for Christmas because he doesn’t want to leave his comrades for the holidays only to return for a couple of months before departing permanently. He then goes into an extended description of how one of the guerrilla units he was with fired guns and artillery at an eclipse, believing that they were keeping a giant frog from swallowing the sun. He asks his family to send “about 10 quarts” of “cool water maple syrup” to give to friends before he leaves, then discusses various family correspondence he has received of late. He expresses interest in recording an aerial description of the area, but fears the noise from the aircraft will be prohibitive. Finally, he discusses more plans to pack up his effects, going to Hong Kong to buy items before leaving, and perhaps making a phone call home.